An audacious cross-border kidnap plan carried out in Istanbul and involving a “honeytrap” is further straining relations between Turkey, Iran and Europe.

Sky News has been given exclusive access to Turkish counter terrorism files which show how Iranian opposition activist Habib Chaab was lured into the trap and smuggled back into Iran.

Dissident Mr Chaab now faces being publicly executed and his friends and family are urgently calling on the European Union and the rest of the international community to intervene to save him.

Iran has been repeatedly accused of using operatives to lure dissidents being protected by Western governments into locations where they can be kidnapped or killed.

This includes the recent execution of Ruhollah Zam in Iran. The journalist and blogger was living in exile in France but his wife says he was persuaded to travel to Iraq in October 2019 where he was snatched by Iranian Revolutionary Guards (IRGC) and taken back to Iran.

It has also been claimed a number of journalists working for Iran International, an independent 24-hour news channel based in London, have been contacted by Iran’s notorious Ministry of Intelligence and National Security with threats that they will be snatched off the streets unless they leave their jobs.

Now there are frantic attempts to try to persuade the Iranian regime not to carry out another public execution.

Friends of the Iranian opposition figure Mr Chaab, who appeared two days after his abduction on Iranian state television “confessing” to terror acts, are now seriously concerned for his safety.

They believe his confession was coerced out of him and his life is in imminent danger. Many are accusing Turkish intelligence of colluding with the Iranian regime to enable Mr Chaab to be snatched and removed from the country. 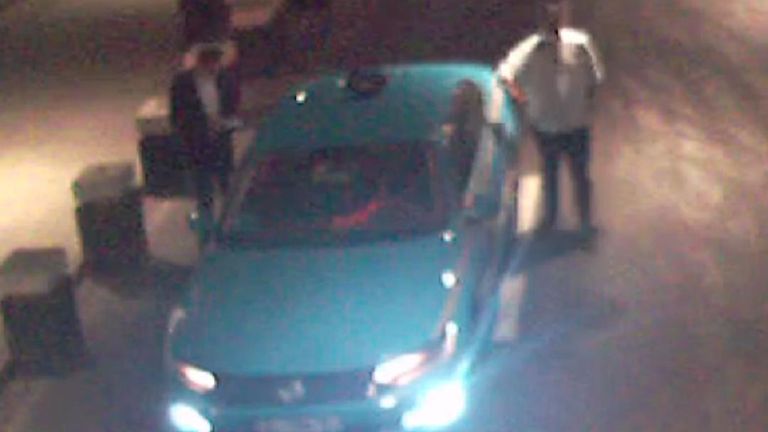 Turkish authorities have vehemently denied being involved in any way in the kidnap and have given Sky News exclusive access to their counter terrorism investigation into Mr Chaab’s disappearance in Turkey in early October in an attempt to refute this suspicion.

The detailed investigation has pieced together the Iranian dissident’s fateful time in Turkey – just over 24 hours – and seems to show an elaborate plot involving multiple people and cross-border smuggling.

A thick dossier of security pictures, receipts, intelligence and old-fashioned detective work was put together and then followed by a string of arrests, with the trail – according to Turkish investigators – leading straight back to Tehran.

A statement given to Sky News from a Turkish official in the president’s office said: “We condemn in the strongest possible terms this illegal operation by the Iranian intelligence.

“The Turkish intelligence identified the individuals responsible for Mr Chaab’s abduction within days and they have since been brought to justice. We are confident that Turkey’s court system will punish them to the full extent of our laws.”

Why was Habib Chaab a target?

The background to the case is complicated but worth taking a look at to learn the context.

Habib Chaab is a founder of the separatist group, ASMLA, whose full name is the Arab Struggle Movement for the Liberation of Ahvaz.

The group has been arguing for independence of Iran’s ethnic Arab minority in the southwest of the country.

Mr Chaab fled Iran more than a decade ago and went into exile with his family in Sweden where he now has citizenship but continues to strongly advocate for ASMLA.

The string of security pictures, uncovered by the Turkish investigation, claim to show a plan was hatched to lure Mr Chaab to Turkey on the pretext of a romantic meeting with a young woman.

The Turkish investigators claim she was, in reality, an Iranian spy who was acting as a “honeytrap”.

There are unconfirmed reports that the two already had a relationship, and that the woman may have loaned him a considerable amount of money.

Whatever the truth, CCTV pictures show those accused of the kidnap congregating in Istanbul the day before the abduction.

Two of them visit a hardware store and buy cable ties of different sizes, which the Turkish authorities claim were used to bind Habib Chaab’s hands and feet when he was snatched and bundled into a transporter van several hours later.

More security pictures show Mr Chaab arriving at Istanbul’s Sabiha Gokcen airport in the evening of the following day (9 October) and heading by taxi to a petrol station nearly 80km (50 miles) away, apparently to make his rendezvous with a woman who is identified as Saberin Saeidi.

The final images of the dissident on Turkish soil show him disappearing into the dark and around the corner where cameras have picked up the transporter arriving a short while earlier.

Once inside the transporter, Turkish investigators say Mr Chaab was drugged and whisked away more than 1,600km (1,000 miles) to the east of the country near the border with Iran where he was smuggled across.

Two days later he is heard admitting to being involved in an attack on a military parade in the south of Iran some years earlier.

An international call for help

His friends and colleagues have urgently called on the international community to intervene, fearing the same fate meted out to dissident journalist Ruhollah Zam.

He went into exile in France but was “disappeared” after being persuaded to travel to Iraq last year.

Mr Zam was executed less than a fortnight ago after being convicted of inciting riots at anti-government protests.

Dr Halaf Khabi, who is an Iranian dissident in exile in London and close friend of Habib Chaab, protested his friend’s innocence and urged the European Union to take action.

He insisted Turkey, Sweden where Mr Chaab lived, and the European Community as a whole needed to take responsibility if his friend was executed.

“Now is the time to act. We need help. Everywhere Iranian dissidents are nervous and scared.

“We feel safe in London but where is safe now if these kidnaps and killings can happen?”